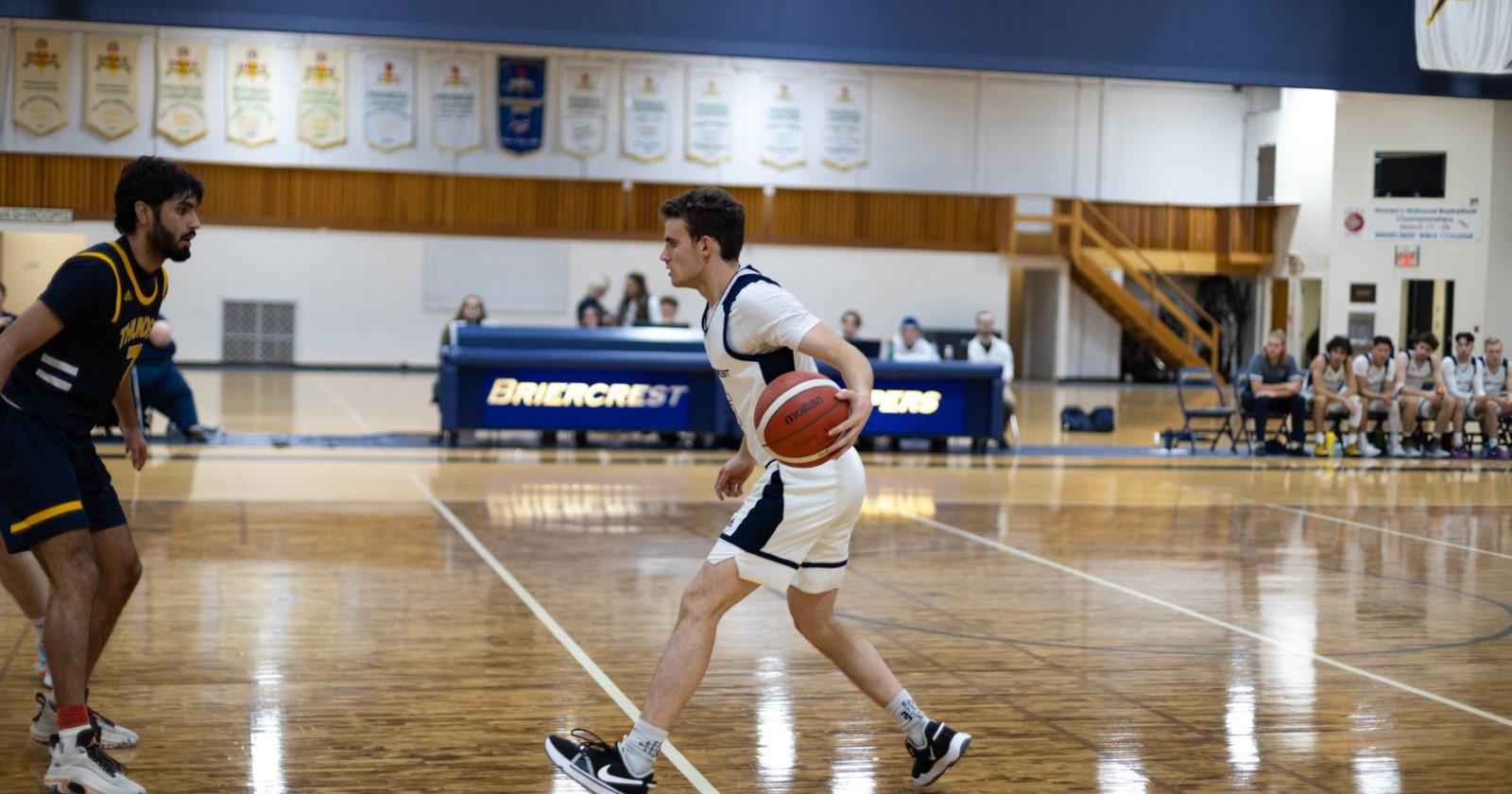 Recaps Below were Written by NWP and NAIT Athletic Departments Respectively.

Our Northwestern Polytechnic Wolves welcomed the Briercrest Clippers to town for a Friday night game. It was team night for the local Grande Prairie schools, so many came out to show their support.

NWP was first on the board with #20 Raylene Badger scoring a lay up. The Clippers would respond 2 minutes later with draining 2 free throws. Abby Crown for the Wolves with a break away, a miss, however hit both on the foul shots. Wolves go up 7-2. The Clippers don't go away and tie up the game half way through the quarter. #4 Gracie Reschke sinks both free-throws. First period ends with Briercrest leading 18-13.

First to score #4 Gracie Reschke for the Wolves, 15-18 for the Clippers. #15 Eve Duerksen sinks a 3 for the Clippers and they go up by 6. To cut the lead to 4, #15 Paige Snyder scores for the Wolves. Half way through the 2nd quarter, Clippers go up by 7. Makayla Porteous would drive to the hoop, score 2, foul and completes the 3 point play to come within 3 points. The Wolves take a few fouls late in the period and the Clippers find themselves up by 9. Gracie and Pagie both sink one late for the Wolves and they finish the half down 39-31.

Wolves #5 Makayla Porteous gets the first point in the third quarter. Back to back buckets for Abby Crown for the Wolves and they are within 6. Clippers go on a run and are up by 10 after 3rd quarter.

The first 5 points go to the Clippers early in the 4th quarter. Briercrest finds themselves up by 15. Back to back from behind the arch for the Clippers. Paige Snyder responds for the Wolves. The Clippers continued to sink baskets and the game ends as the Clippers win 68:48.

Player of the Game for the Briercrest Clippers was #13 Madison Beattie.

Player of the Game for the NWP Wolves was #4 Gracie Reschke.

Our Northwestern Polytechnic Wolves welcomed the Briercrest Clippers to town for a Friday night game. It was team night for the local Grande Prairie schools, so many came out to show their support.

Briercrest was off to a quick start, hitting the first 3 buckets. #5 Mohab Milad steals and scores the first hoop for the Wolves. Back to back dunks for Wolves #20 Emmanuel IIoka gets the crowd excited. A couple nice blocks also by #20 adding to his ACAC Block record. At the end of the first quarter, NWP are behind Briercrest 14-23.

Briercrest get the first basket to start off the second quarter. Wolves #13 Kujtim Ujkani answers back with the tip in. Wolves #12 Mohanad Eraghubi with a nice basket. Dream team #8 Chris Liwanag and #11 Terrance Lennox add another 2-points to the Wolves score. Briercrest answer back with back to back baskets. Wolves turn to get on a roll, #20 Emmanuel IIoka drains a 3 to come within 4 points. Briercrest turns over the ball, resulting in a 3 point make by #8 Christian Liwanag, Wolves down by 1. Into the middle for the dunk #13 Kujtim Ujkani for the Wolves puts them on up by 1. 36:35. The half is over and the Wolves are leading 42:37.

On Saturday night, the NAIT Ooks took on the Briercrest Clippers in the NAIT gymnasium. The Clippers won the game 76-65.

At the beginning of the first quarter, Ooks took the lead; the Clippers didn't let them get far, taking it back with a drive from number seven Brooklyn Martens and a three-pointer by number six Melissa Ellis. With the Clippers taking a massive ten-point lead in the first, the Ooks called their first timeout to regroup. The Ooks were slowly making their way back with some incredible offensive plays by number six Payton Neilson and nine Abi Payne. However, the Clippers weren't letting go of their lead, easily keeping the Ooks at bay, leading the game with a score of 22-20 after the first quarter going into the second.

In the second quarter, the Ooks tied the game up 22-22. The Ooks were efficiently shutting down the Clippers' offence. In the hopes of gaining momentum, the Clippers called for the first time out of the quarter. The Ooks took the lead with a great set of foul shots by nine Abi Payne, giving the Ooks a six-point lead for the first time. The Ooks lead the game with a score of 36-32 going into the second half.

After the halftime break, the Ooks dominated offensively; however, the Clippers weren't done yet and started to close the gap the Ooks had created with some intense drives by number nine Dori Sunderland and eight Amber Tilcox. The Clippers tied the game up with a foul shot for the 43rd point. The Clippers took the lead back with a fantastic three-point shot from number thirteen, Madison Beattie. However, it wasn't long before the Ooks tied it back up with a three-point shot by number six Payton Neilson. The game is neck and neck, with neither team letting the other get far. The Ooks killed it offensively with excellent ball movement and driving to the net. Ooks could finally break away from the Clippers and take a five-point lead. Ooks lead the game 56-51 going into the fourth.

In the fourth quarter, Clippers slowly advanced on the Ooks closing the Ooks gap. The Clippers tied the game back up, tying the game at 59-59. The Ooks took a timeout to regroup; however, coming back, the Clippers took the lead with a fantastic jump shot for the 61st point. The Clippers had stretched their lead to a six-point; however, the Ooks weren't out yet with some great offensive plays by number seven Ellie Wilde. The Ooks were unable to close the gap in time, and the Clippers won the game with a score of 76-65

On Saturday night the NAIT Ooks took on the Briercrest Clippers in the NAIT gymnasium. The Ooks won the game 77-72.

In the second quarter, the Ooks continued to grow their lead with great offensive plays by number four Benjamin Kamba and twenty-two Nhiall Kuech. However, the Clippers weren't giving up with some great offensive plays by number seven Brolin Simes and ten Jackson Mayes, slowly closing the gap. Nonetheless, the Ooks lead the game 36-26 in the second half.

After the halftime break, the Clippers had excellent ball movement offensively and slowly began closing the gap. The Ooks' defense kept the Clippers at bay, continuing to hold on to their ten-point lead. The Clippers refused to let up with terrific jump shots from number ten Jackson Mayes and number thirteen Oroma Bongomin. Ooks hang onto their lead going into the fourth quarter with a score of 56-53.

In the fourth quarter, the Ooks started to grow their lead back with great offensive plays by number three Dante Dinter and number seven Griffin Lorenz. The Clippers weren't out yet; however, they were slowly gaining momentum. The Clippers take their first time out of the quarter in an attempt to regroup. With the Clippers, new-found momentum, the Ooks called a timeout to regroup. Though the Clippers put up a great fight, the Ooks continued to dominate both offensively and defensively, winning the game 77-72

Throughout all 80 minutes of play, I did not see any of your players question a referees' call. Your team plays hard every minute and still has the ability to keep good sportsmanship in mind.
Coach of an opposing team
Start your application