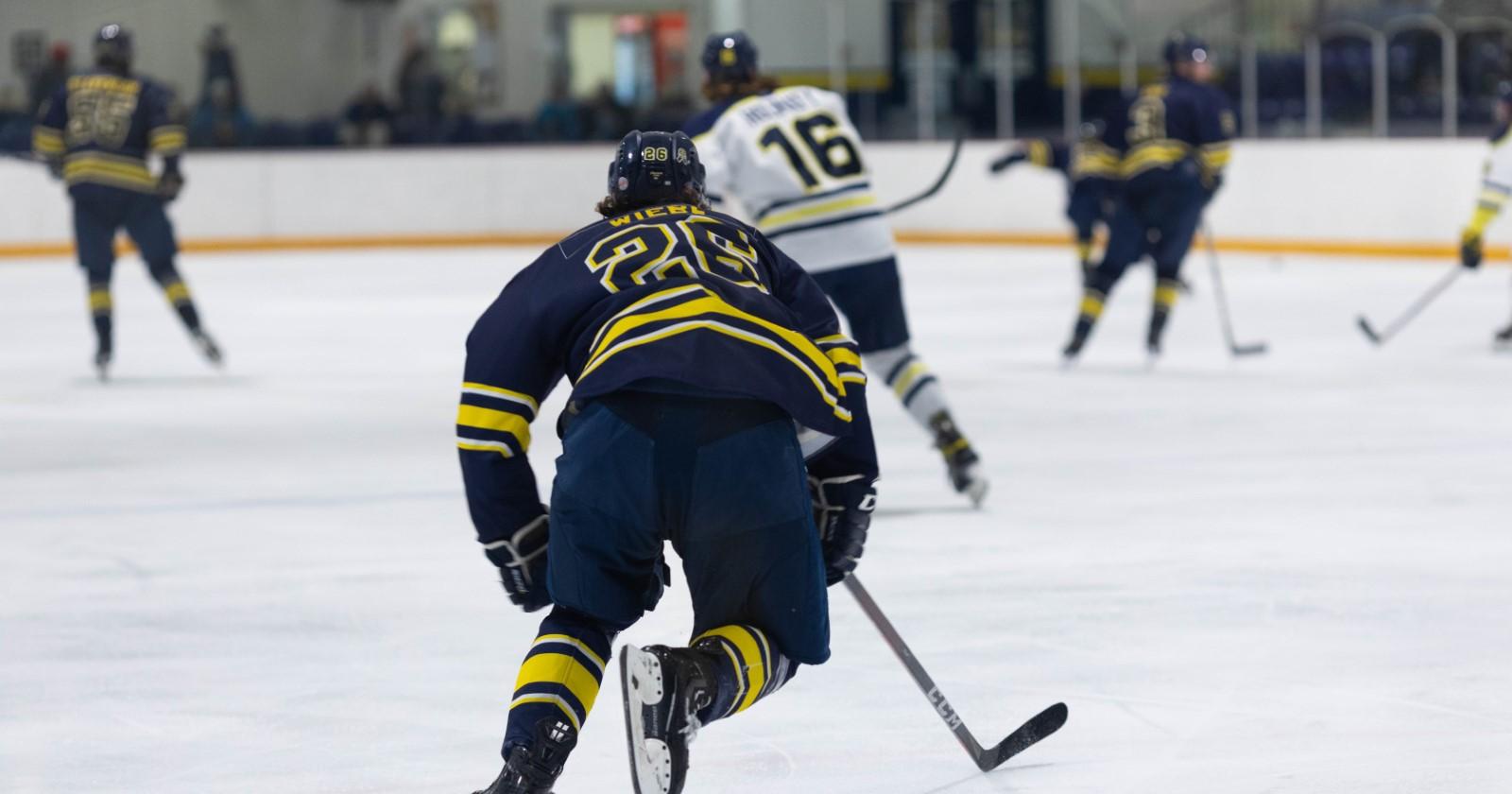 By: Sam and Jeremy Demoskoff

Briercrest outworked, outhit, outskated, and outchanced the visiting NAIT Ooks Friday night, but they just didn't get that little black disc in the net enough times.

NAIT are the defending champs, perennial contenders and they boast 16 league championships throughout their illustrious history. But the Clippers made the Ooks look like they were wearing kryptonite most of the evening as they poured a season-high 43 shots on NAIT's player of the game, Taryn Kotchorek. He may have looked like a leopard with all of the puck marks, but he got the job done as his team managed to escape with a 4-2 victory.

"They're a great, hardworking team," said Kotchorek. "They continually put pressure on us… they came out firing tonight."

Briercrest opened the scoring midway through the first period as Alex Pellerin ripped a shot that Kotchorek couldn't handle and a juicy rebound was there for Cole Stevenson to put home.

A three goal outburst in the middle frame by the opportunistic Ooks built them a 4-1 lead heading into the third, at which point the Clippers tilted the ice and pressed for the comeback. The boisterous crowd had several moments to celebrate: big hits by Reagan Poncelet and Caleb Grandfield, a miraculous save by Dominik Tmej, and a big goal by player of the game Theo Citrullo- his first as a Clipper.

Despite sending lots of rubber at the NAIT net, Kotchorek stood tall and the Ooks hung on as time expired.

Briercrest will look for a repeat of the effort with different results in the rematch tomorrow afternoon. "When we played our game and were physical we were really effective," reflected Citrullo after the game. "We know that if we keep doing that, we're pretty confident that we can beat them."

By: Alex and Jeremy Demoskoff

A tenacious commitment to their gameplan paid off as the Briercrest Clippers knocked off the NAIT Ooks in overtime Saturday afternoon.

"We want to take pride in playing with pace, playing physical- 'playing Briercrest hockey' is what we call it," shared alternate captain Daine Milgate afterward. "We know it wears them down."

The ordinarily top-flight Ooks looked as if they had their wings clipped as Briercrest outshot the guests 41-28 and were only denied a bigger score by some solid goaltending by NAIT's Ryley Osland.

It was over six minutes into the game before Briercrest allowed a shot on goal to accompany the six they had fired at Osland. Landon Russell and Milgate made some huge hits and further reduced NAIT's already shortened bench. The visitors got a lucky bounce on a flutter shot by NAIT's player of the game, Mitchell Williams, and went to the dressing room after 20 minutes no doubt feeling rather sheepish at having a lead despite a 17-6 shot deficit.

From there, the Clippers took control. Kolter Pawlick shut the door for the home side and they attacked in waves. Caleb Grandfield, Zach Thususka, and Alex Pellerin all had dangerous chances before Jaedon Little went in aggressively on the forecheck and made a great pass to Jake Dale, who lasered a sharp-angle shot past Osler to tie things up.

A high-sticking penalty late in the third gave Briercrest a powerplay to start overtime, and Pellerin set up player of the game Reagan Poncelet for the winner. The roof nearly came off the Barkman arena as the crowd erupted with delight.

"We knew we had to do more of what we did yesterday," explained Poncelet. "The focus was intensity, team physicality, and skating for a full 60 minutes."

The Clippers will hit the road next weekend for a pair of games in Calgary against the SAIT Trojans before returning to close out the semester Nov. 25-26 against Portage College.

Briercrest athletics has been instrumental in my learning and personal development. This program mentored me and taught me about servant leadership and the importance of authentic relationships.
Brooke Peterson Class of 2014 BA Business, women's volleyball, 2013-14 ACAC Second Team All-Conference and CCAA Academic All-Canadian
Start your application