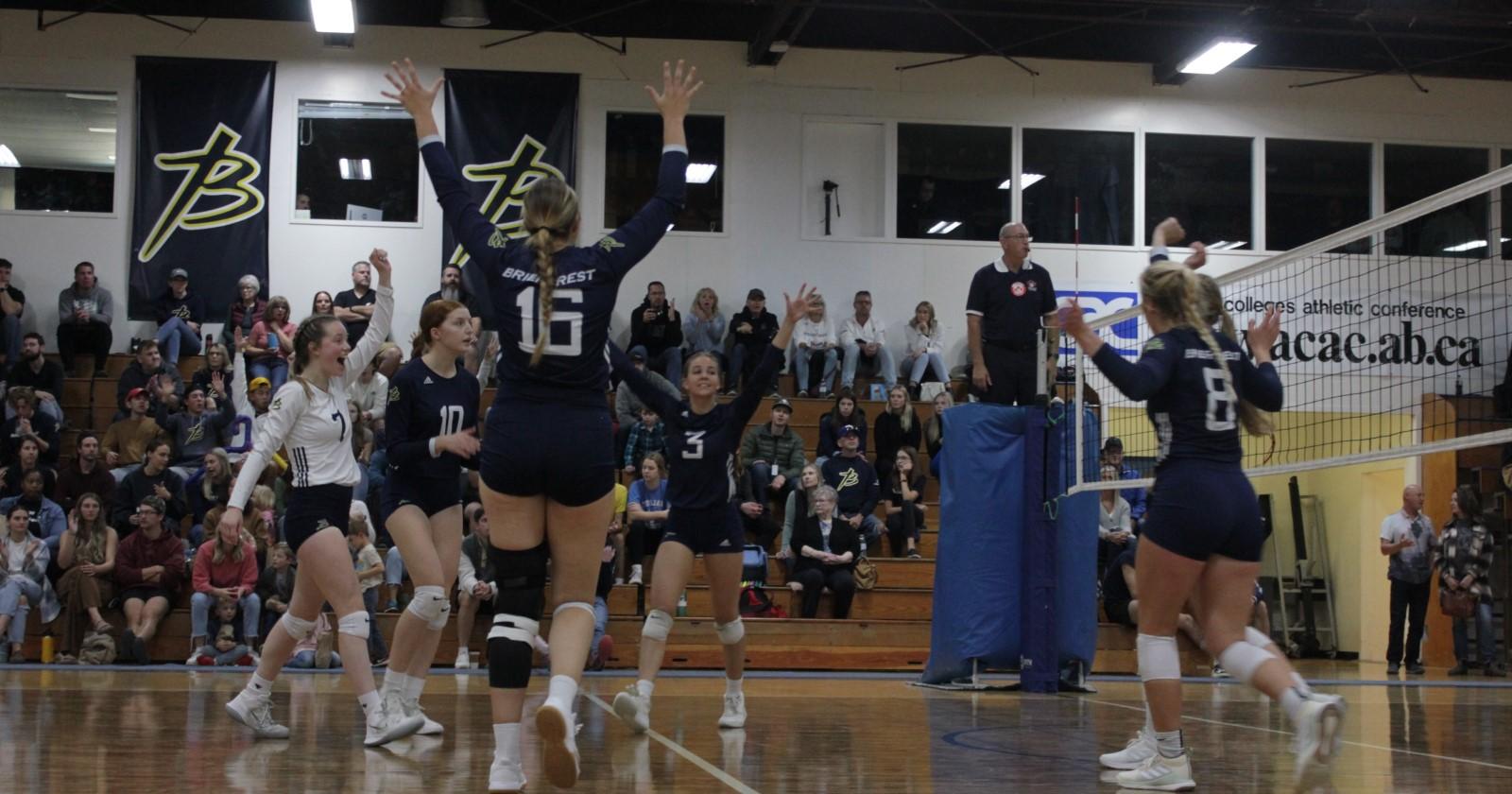 Scroll down below for recaps of each game this past weekend!

The Northwestern Polytechnic Wolves (NWP) made the long trek to Caronport, SK, to play the Briercrest Clippers in a match-up of ACAC women's volleyball teams. The Grande Prairie school was hungry for their first win of the season in the tough North Division, while the Clippers looked to ascend the ACAC South standings.

In the opening set, serving errors by the hosts and potent offense from Wolves' Alexandra Pullishy, Sierra LaValley, and Gracie Smith gave NWP a 12-5 lead. The Clippers countered with strong attacking by Kelsey Simes and tricky serving from Summer Okerstrom and Brooklyn Buhler, knotting the game at 19-19. Down the stretch, the Wolves rode the offensive efficiency of Pullishy and Katie Nashim as they stole the first set 25-23.

The Clippers jumped to a 6-1 advantage in set two, but the Wolves quickly squared the game. With Clippers' Brynn Hardy smashing away on the left side and Jess Zacharias handcuffing the visitors with her serve, the hosts built a commanding lead. Faith Buhler delivered a rocket to the middle to seal the set for Briercrest, 25-15.

In the middle frame, Briercrest twice surged to large leads, but the Wolves fought back each time, knotting the score. Clippers' setter Jess Zacharias and teammate Brynn Hardy baffled the Wolves with their serves, and Simes and Buhler headed up the offense, but contributions from Nashim and Gracie Smith drew the Grande Prairie team level at 22-22. Robyn Alexandruk's ace gave the visitors a glimmer of hope, but Julia Beer took control of the final moments, allowing Briercrest to steal the set 25-23.

In the penultimate frame, NWP's Pullishy continued to punish the block, and setter Madison Chabot vexed the Clippers with line drive serves as the Wolves built a 21-17 lead. The Clippers won an ugly rally to cut the deficit to one, but clutch serving from Chabot awarded a close set to the visitors, 25-23.

In the deciding set, outside hitters for both teams continued to thump the ball. In the waning moments, Nashim's back row attack was nullified by Julia Beer's kill, and when Brooklyn Buhler's crosscourt bomb found the floor on the Wolves' side, the Clippers celebrated a 15-9 win.

The Briercrest Clippers hosted the Northwestern Polytechnic Wolves in a cross-division matchup in ACAC men's volleyball, treating the home fans to a match of the highest caliber.

The action opened with vigorous offensive play from both teams. Wolves' Joshua Watson sizzled a pair of aces, and teammate Justice Bigstone stuffed a ball straight down to give the visitors a 13-9 edge. Out of a Briercrest timeout, NWP middle Thomas Wheeler thumped a pair of convincing kills, but Clippers' Karym Coleman replied with two aces. Wheeler and Bigstone directed their squad the rest of the way, resulting in a 25-19 set win.

In set two, the Wolves' blockers keyed on Coleman and shut him down on consecutive attacks, but setter Jeremy Martens kept feeding his big man to good effect. Bigstone and Coleman traded kills, as did Clipper middle TJ Ward and Wheeler. Once again, Bigstone's attacking prowess allowed the Wolves to secure the set, 25-21.

Briercrest raced to a 9-2 lead in the third frame, with Davis Borden featuring on the left side, Ward and Noah Dirsten finding success in the middle, and Jackson Anderson starring on service. Coleman notched four points on three aces late in the action, and Briercrest stole the set 25-14.

Coleman stamped his influence on the fourth set, with Bigstone and Joshua Watson determined to limit his success. When Wheeler's serve tickled the tape, the game was even at 15-15. Borden, Dirsten, and Coleman battled Watson, Morrison, and Bigstone kill for kill and block for block, but it was Dirsten who put the final touches on a 26-24 victory to tie the match at two games apiece.

When Matthews blocked Borden on the wing and Bigstone neutralized Dirsten in the middle, the visitors raced to an 8-3 lead. Just like in the fourth set, Coleman, Borden, Morrison and Bigstone were the key combatants. In the end, timely blocking from the Wolves allowed them to prevail, coming out on top 15-10 in the final frame.

The NAIT Ooks women's volleyball team made the long trip to Caronport, SK, via Medicine Hat, in the hope of securing their first match win of the season against the Briercrest Clippers, who registered a stellar 0.441 hitting percentage in a thrilling five-set triumph over the NWP Wolves on Friday night.

Briercrest raced ahead 9-3 behind the intelligent setting of Bailey Opseth and crisp hitting from all her targets. Anika Dyck and Charlotte Vandenelzen featured on offense for the Ooks, but Faith Buhler matched their efforts with timely kills and roll shots. The hosts stretched their lead as Rachel Stead's serving baffled the Ooks' receivers. NAIT's Karly Burkinshaw provided a brief spark for her squad as she stuffed a backrow effort from Buhler, but the Clippers rode the serving of Brynn Hardy to a quick 25-14 victory.

Set two opened with Clippers' fifth year Kelsey Simes stuffing NAIT's Kayla Zazula and Opseth connecting with Stead on a quick set. Buhler extended the host's lead on her serve before Vandenelzen and Dyck responded. Ooks' setter Kate Krogen found Zazula for a punishing hit, only to have Buhler answer with a thunderous solo block. The lead grew as Kacey De Jong's serve handcuffed the NAIT passers, and Buhler delivered the winning blows to seal the set, 25- 11.

The third frame began with setters Opseth and Krogen distributing their full complement of attacking options. Hitting miscues by Briercrest, combined with spectacular defense from Zazula and seeing eye kills from Dyck, eroded the Clippers' lead. The Ooks amped up their defense, with Burkinshaw, Dyck and Zazula leading the charge, but their feisty effort fell short as the Clippers scored a narrow 25-23 victory to sweep the match.

Following a disappointing five-set loss to the NWP Wolves on Friday, the Briercrest Clippers men's volleyball team looked to right the ship as they faced the NAIT Ooks, leaders in the ACAC North.

Briercrest hitters Davis Borden and Karym Coleman, who combined for 36 kills against NWP on Friday, picked up where they left off, while NAIT responded with a strong net presence on the block. NAIT hitter Shae McIntyre, ranked 2nd in the ACAC in aces, featured on offense. The visitors were clearly conscious of the short ceiling in the Caronport gym and struggled to establish a useful rhythm on serve. Borden served out the game, 25-16.

Carter Hills opened set three for NAIT with useful contributions. The Clippers' blockers frustrated McIntyre early, but the Ooks big man remained a regular target of Godin. Martens surprised the NAIT block with a great back set to Anderson, but NAIT opened a small gap as Hills began to find his offensive chops. With McIntyre and Bishop supplying the power, and the Clippers wrestling with their serve, NAIT took the game, 25-20.

Coleman, Ward, and Anderson brought the brawn for the Clippers to begin set four, but it was the defense, let by Martens and Nachtigall on the right side and Borden and Ward on the left, that pushed the home team to a sizeable advantage. The Ooks could not string together any consistency on their attack, as Coleman and Anderson neutralized their rallies. Still, the Edmonton team continued to chip away, but Coleman delivered the decisive blows down the stretch, giving the hosts a 25-19 win in the final stanza.

Jared Krogen, a former Clippers libero, received the Player of the Game award for the visiting Ooks, registering nine digs and two assists. For the Clippers, setter Jeremy Martens directed a smart and diversified attack, and his three digs, two aces, and 32 assists earned him POG

I have played volleyball since grade five and I have been on many teams, but never have I been on a team quite like this one. The whole team, including the coaches, truly cares about who you are as a person, not just as an athlete.
Amanda (Lundquist) Wendel Class of 2015 BA Applied Linguistics TESOL, women's volleyball, 2014-15 ACAC South All-Conference Team
Start your application